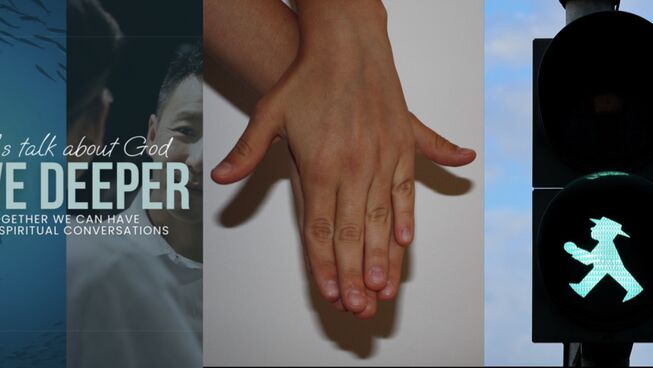 We sat down with Mark Leong to catch his thoughts on what went down (other than his exorbitantly long locks - when is he going to cut his hair!) during Headstart's in-between terms.

So Mark, we just finished the in-between terms series. We had 134 registrations over the 3 weeks which was massive! If there was one thing that held all 3 sessions together, what was it?

You know how sometimes it's only when you are the end, and you look back on your holiday that you realise how good it was? Well, that was how in-between terms felt for me. It was only when i looked in the rear-view mirror that I realised that the key theme was "Bite-size" and it was a great 3 weeks: we had been able to breakdown talking and sharing Jesus into bite-size, manageable steps.

hahaha... one day I need to tell you about how I do Junk Food Week with my kids and how Jane took them to Hungry Jacks... but that's another story.. but let me lean into that for a moment.

The flame-grilled burger for me was Session 1: Kickstarting Spiritual Conversations. It was the real heart of the meal and the special sauce was this - by lowering the bar, evangelism is more: more engaging (as opposed to guilt-inducing), more easy (as opposed to daunting) and more exciting (as opposed to deflating and defeated).

Now, as I said on that night: Since when has a Christian speaker ever told you to lower the bar in Christian living? I know the heretical alarm bells are ringing in your head!

However, what stuck with me and many that evening was that the high bar leads to less evangelism - many felt ill-equipped to start a conversation in case they got it "wrong". Many shared how they felt guilty after conversations because they felt they didn't make the most of it, and the gut reaction to this was to over-function and information dump in every conversation: this conversation was their one shot (to borrow from Hamilton), and so they tried to do too much in it, leaving their friend and colleague overwhelmed and awkward, and the Christian worker deflated. It was eye-opening to see how widespread these feelings were.

And so, we proposed a different (and may I suggest) a better way. Start off with a Spiritual Conversation where you are curious and it's a conversation. Your goal is not to impart information and teach but rather just listen and ask a safe and good follow up question. Listen first rather than info dump. If you're invited to say something more (which often you will be), then you can share a teaser of your faith.

Lowering the bar in this way opens the kinds of people we can have a spiritual conversation with - someone shared how they had one with a tradie as well as a work colleague - and the goal is to listen well and dive deeper in getting to know them. From the reflections on that evening, workers were really excited by this idea of lowering the bar. See for yourself what they said here.

Ok - if that was the burger, what was the chips... cos you always get a meal deal when you go to Hungry Jacks.

It feels like I am talking to myself! Look, let's face it, the best bit of meal is not the burger, but the chips. The burger may be the heart of the meal, but the chips make the meal the meal. The chips bring everything together.

That was Jane's session on How to read the Bible with someone without the awks. Hands down brought everything together, because we were able to hear the next step: If our spiritual conversations accumulate over time... then what?

And in this session - we focussed on the HOW. Using the Word 121 resource (either in-person or online over Zoom) became more doable, because we saw how Jane did it. We saw how it was a free resource to download, how it required no prep because the answers were there, and how having those answers made the dynamic better: Rather than being a bible teacher where the Christian worker has to defend the faith and is assumed to have all the answers, we were a bible sharer journeying side by side. This is especially relevant when the person we are reading with is an adult - they know at what pace they like to learn and they can come up with their own questions (from our experience, that often is the case at City Bible Forum where workers read the Bible with colleagues, uni friends or high school friends).

Thanks Mark for sharing. Sounds like a great in-between trilogy you had. Will the directors cut be released next year at Headstart?