In praise of Harmony

Faith, science and the Templeton prize

In praise of Harmony

Faith, science and the Templeton prize 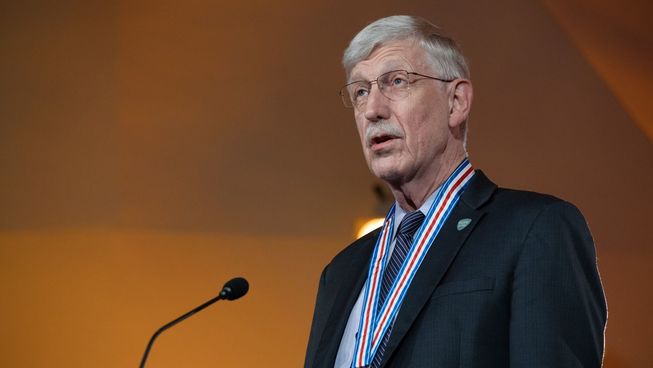 This article is a selected excerpt of a transcript of Dr Francis S Collin's acceptance speech as Templeton Laureate on 24th September. To read the full transcript and watch his speech, click "Read More" at the end of this article.

The possibility of my appearing on a roster of legendary figures that includes Mother Teresa, Alexandr Solzhenitsyn, Billy Graham, the Dalai Lama, and Archbishop Desmond Tutu is so far outside of my imaginings that I have to wonder if the Templeton Prize Selection Committee made a mistake this year. But I am deeply and profoundly grateful to have been chosen for this great honor, and I wish to express sincere thanks to Heather Templeton Dill and the John Templeton Foundation. My only regret about this spectacular evening is that we could not all be together in person. On the other hand, however, the virtual nature of this event has made it possible to invite many friends who might otherwise not have fit into this historic hall at the National Academy of Sciences – and so I am grateful for that, and send a shout out to all of you who are watching this evening.

I have been blessed throughout my 70 years by the gift of an amazing circle of friends, colleagues, mentors, and scientific and spiritual guides. I have also been fortunate to be part of a family that includes my now departed but truly remarkable parents, my three brothers, my amazing daughters Margaret and Elizabeth, my five awesome grandchildren – and most of all, the greatest gift I have on this earth, my wife and soulmate Diane Baker.

For my theme this evening, I have chosen to speak about a phenomenon that I believe ought to attract our interest and devotion, but which seems to have suffered some significant downgrading. The phenomenon I speak of is Harmony. I first learned about that term as it applies to music, and you heard this evening the profound way in which the combination of musical tones chosen by a composer and rendered by a gifted professional like Renee Fleming can touch your very soul. But harmony applies in other realms as well. It is to be contrasted with dissonance. In many areas of current experience, harmony seems to have lost out to dissonance and polarization.

Dissonance can of course be a powerful motivator – but one that should inspire an effort to resolve it. The third to the last great “Amen” at the end of Handel’s Messiah, ending in a crashing, wrenching, unresolved, and prolonged A7 chord, with the 7th ominously prominent in the bass line, never fails to bring to me a tightening of body and spirit that is almost unbearable – but then after a terribly long pause, moves to the most powerful resolution of D major imaginable, accompanied invariably, at least for me, with a flood of tears.

Ladies and gentlemen, we have a lot of dissonance in our current experience. We need to resolve that. We need more harmony.

Beginning with the reason that I am here tonight, let me say something about the perceived disharmony between science and faith. Nearly six in ten adults in the US say science and religion frequently conflict. That was certainly my view as I was growing up in Virginia, without much of a spiritual perspective, but falling in love with the scientific method. Faith seemed to me to be the antithesis of the rational scientific approach that I wanted to pursue, and so I migrated, without much thought about it, into agnosticism and ultimately atheism.

But then I moved from quantum mechanics to medical school, and the questions of the meaning of life, and the reality of mortality, were impossible to ignore. Science didn’t help me much here. But I was surrounded by patients, and some of my professors, for whom faith provided a way to wrestle with those profound questions. That was puzzling. Challenged by one of my patients to describe what I believed about God, I realized my atheism was dangerously thin. Seeking to prop this up, I began a journey to try to understand why intellectually sophisticated people could actually believe in God – and to my dismay, found that atheism turned out to be the least rational of all the choices. To quote Chesterton, “Atheism is the most daring of all dogmas, for it is the assertion of a universal negative”.

Over a two year period, with much help from wise mentors and the writings of C.S. Lewis, I slowly and rather reluctantly came to the conclusion that belief in God, while not possible to prove, was the most rational choice available. Furthermore, I saw in the very science that I so loved something that I had missed — the evidence that seemed to cry out for a Creator: there is something instead of nothing, the universe had a beginning, it follows elegant mathematical laws, and those laws include a half dozen constants that have to have the exact value they do or there would be no possibility of anything interesting or complex in nature. God must be an amazing physicist and mathematician.

But would he or she actually care about me? The major world religions seemed to say yes – but why should I trust that? And then I met the person who not only claimed to know those answers, and to know God, but to be God. That was Jesus Christ. I had thought he was a myth, but the historical evidence for his real existence was utterly compelling – including his life, death, and – yes, even this – his resurrection. And as the truth of the New Testament sank in, I realized I was called to make a decision. In my 27th year, I could simply not resist any longer. With some trepidation, I knelt in the dewy grass on an October morning somewhere in the Cascades, and I became a Christian.

Friends in whom I confided my newfound faith predicted this would be short-lived. After all, I was by then a physician who was interested in studying genetics. Genetics means DNA. DNA means evolution. And by then I was convinced that evolution was not only just a theory, it was supported by evidence that made it about as compelling as gravity. Surely, they said, my head would explode when the conflicts emerged. But that never happened. It is one the great tragedies of the last 150 years that an ultraliteral reading of the first chapters of the book of Genesis have been taken as a litmus test for serious Christian faith. Augustine (the current subject of my book club) warned1600 years ago about such a literal interpretation. Those powerful and mystical Genesis words about creation tell us about who we are, and who God is, but were never intended to be a scientific textbook.