It’s the modern malaise. Reaching upwards for something, but never quite sure what it is.

It’s the modern malaise. Reaching upwards for something, but never quite sure what it is. 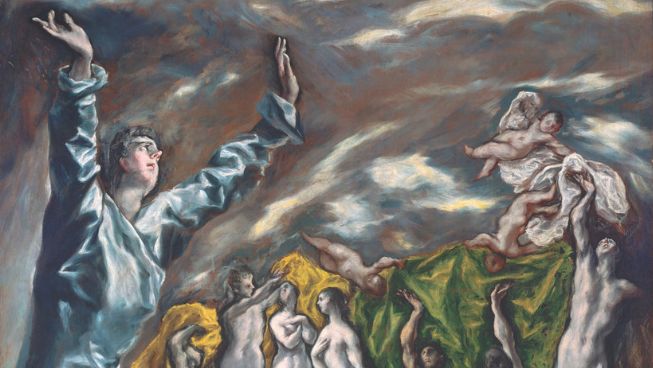 Do you ever feel ripped off? Ever feel that even if you have reached the pinnacle of something, be that in business (or the actual pinnacle of Everest!), there’s still something missing?

It’s not unusual to feel that way, in fact it’s increasingly common. Many people in the West are highly anxious, worried that they’ve missed out on something, despite having so much. It seems like we’re not lacking opportunity or choice, we’re lacking meaning and purpose.

El Greco’s 1604 painting, “The Opening of the Fifth Seal” was a large fresco painted and hung above an altar in Spain. It’s absurdly modern looking despite being over 400 years old.

The painting depicts St John the Apostle on the island of Patmos, as recorded in the New Testament book of Revelation (also known as The Apocalypse) holding his hands upwards in ecstasy towards heaven, as he experiences a vision of Christ. The painting now hangs in the Metropolitan Museum of Art in New York.

Well most of it does. For apparently the top five feet of the painting was ripped off and lost somewhere in the time between it sitting above an ancient altar in Spain and hanging on a wall in modern New York.

And which bit has been ripped off? The Christ bit. The bit with Jesus enthroned in the heavens, towards which St John is raising his hands in worship. Ol’ John is worshipping still, but there’s nothing above him to worship.

Feeling ripped off. Reaching upwards, ever upwards for something, but never quite sure what it is. It’s the modern malaise. Could it be that we are, like El Greco’s St John, created to worship something truly worth worshipping, but find ourselves raising our hands towards, well, towards nothing?

Is this it? Is this all there is? The constant churn and desire for more in our culture indicates that whether or not we can articulate it, we feel that. There is a restlessness that belies the amount of stuff we have; the number of opportunities that come our way.

Of course we get glimpses that there is something more, especially in life events that we can’t explain. The birth of a child is a great example. Oh we can all explain how that baby came to be, but when we see our son or daughter lying there, mewing quietly, gasping its first breaths, we just know we need to thank someone! Just a pity there’s no-one to raise our hands heavenwards.

The good news of what Christianity says, indeed what St John himself saw with his own eyes in person long before his vision on that island, is that God didn’t just ask us to look heavenwards to see something worthy of meaning and purpose. No, God himself, in Jesus, came down to this earth in order to give us life - true life that would ensure we no longer feel ripped off.

And here’s the funny thing. Worshipping Jesus, putting the five feet of ripped off painting back in its place, doesn’t leave us feeling ripped off about everything else in life!

When meaning and purpose are located in the right place, rather than in the other things we hold our hands out towards, they become a delight to enjoy in and of themselves. Work, family, pleasure, hobbies, influence, whatever, they are now able to bear the weight they were designed to bear. They become enjoyable not because they mean everything, but precisely because they don’t!

A life spent worshipping Jesus is not always easy. It’s joyous on occasions, it’s hard on other occasions. Jesus gives you true life, but he also demands you give up your life in order to save it. That’s a conundrum itself!

But here’s what worshipping Jesus won’t do. It won’t leave you feeling ripped off. Not here and now. And not there and then either. There’s a day coming when we’ll reach our hands up to worship and we’ll see the Jesus that El Greco painted, that John saw in vision, and whose absence will become presence. And we’ll never feel ripped off again.