Is there any common story on which to hang our hopes?

Is there any common story on which to hang our hopes? 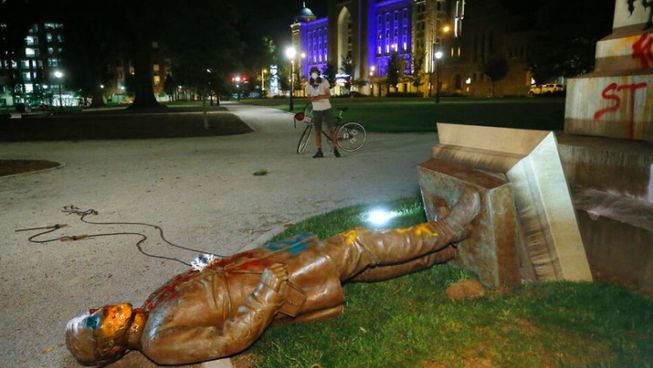 Civil disobedience is back on the agenda. With statues toppling and police forces being called on to step down, it’s a heady time for a revolutionary.

Yet is what we are seeing today actually civil disobedience? Let me explain.

Civil disobedience has done much good in the past. Think of how those who protested in the 60s in the civil rights movement were trained to stand in the face of police lines, and not flinch even when a baton was waived in their faces, or across their bodies. There was a strong moral framework to the movement that challenged the state to recognise those who belonged to the “civic”.

Yet we need to understand the context of the word “civil”. “Civil” or “civic” comes from the Latin “civicus” which simply meant a citizen, and particularly a citizen of Rome.

We use the term “civil” today to mean cordial or politic, and we talk of people who are “civilised”, literally meaning “of the city”, as opposed to those grubby barbarians in the wilds, as the Romans would have thought. Much as it is now, it was then. City dwellers would look down their noses at those in the country. If there had been coffee, they would have been coffee snobs.

But more than all of that, the idea of “civil” or “civics” recognises a two way relationship of responsibility between a government and its citizens. In Rome a civicus would be afforded all of the rights, and assume all of the responsibilities, of the laws of Rome. Which is why St Paul, when facing a beating in the book of Acts in the Bible for supposedly stirring up a mob, pulled out his Roman citizenship papers. Sure he might get a beating, but not before a fair trial. A civicus could expect no less.

But he could expect no more either. If he had stirred up a mob then it was clear he had broken the contract with the civil authorities of Rome that prohibited such actions. Each party, the individual and the state, recognised the other.

What we are experiencing today - and seeing nightly on our social media and TVs - doesn’t seem to fit that category. And I say that not because of the level of violence or lawlessness per se. They are symptoms of the deeper problem, namely that the civici have concluded that the state no longer upholds its responsibilities to its citizens, and therefore the contract is broken. The citizens no longer legitimise the authority of the state. Result? Lawlessness.

I don’t think our Western nations are at that stage yet. I believe that the government is a mix of good and bad, and operates more or less that way from the top down. We have layers of government, and there are checks and balances down through these layers. There are a few countries in the world that don’t have governments in a truly recognisable form, and in that I’d include places like Saudi Arabia and possibly North Korea. Some other places too. And you’d recognise the lack of government when you got there.

What we are experiencing now is the tension of people who don’t recognise the government, rather than those who want the government to mend its ways. So it’s not civil disobedience. It’s a desire for revolution or overthrow. Though what they think is on the other side of that is anybody’s guess. Or more to the point, it’s not a guess, because we’ve seen how revolutions work in the past.

Yale theology Professor, Miroslav Volf, had this to say about the modern West:

The idea of flourishing as a human being has shrivelled to meaning no more than leading an experientially satisfying life. The sources of satisfaction may vary: power, possessions, love, religion, sex, food, drugs - whatever. What matters the most is not the source of satisfaction, but the experience of it - my satisfaction. Our satisfied self is our best hope.

My satisfaction. Not our satisfaction. And certainly not your satisfaction. We’re living a shrivelled life according to Volf, and the upheaval and turmoil we are witnessing is not proof of a coming glorious future being birthed, but of a drying up husk that is hollow and devoid of nutrient.

Shrivelled Disobedience. It’s what we’re left with when the idea of the civic or civil has burned off. And shrivelled disobedience compares unfavourably to civil disobedience precisely because there’s no common ground to call us to. We have shrivelled and are empty, ready for the winds of change to blow us away. That’s our great cultural fear.

In his famous "I have a dream" speech Dr Martin Luther King Jr called people to what he knew they knew. What he knew they knew together. It was a speech dripping in common understanding of humanity and hope and justice, steeped in the Biblical picture of a future common good. In fact he quotes from four books of the Bible in that speech. And when you listen to that speech and you hear someone in the crowd calling out (as they do), “Yeah?”. They’re calling on him to keep going. Keep pressing in to describe that dream. They get it!

That same speech now? I believe it would elicit a jaundiced “Yeah, whatever.” There’s no longer a common story to hang anything on. And the Bible? Part of the problem, not part of the solution surely!

Volf is right: “Our satisfied self is our best hope”. And that just feels incredibly sad. And incredibly familiar. The Biblical story sets the precedent for such an outlook. It’s not as if the current situation should have caught us by surprise, not if you’re familiar with the Bible at least.

At the back end of one of the most galling books in the Bible, the book of Judges in the Old Testament, in which the whole civil project of God’s chosen people has fallen into disarray and rebellion, we read these words twice:

God had chosen Israel to be civilians in his nation, a country which would look much like MLK Jr describes in his speech, in which justice flows like a river. However, have a read, because it’s anything but. In fact injustice has made that river run red. The Bible doesn’t pull any punches about how bad things get when we all just set our own standard of what is right and wrong.

So is there any hope? Well the Bible story is a story after all! Judges is near the beginning, and the book immediately after this is a small, stunning story of a woman called Ruth. A woman who is an ethnic outsider, and without any civil rights in Israel. Yet somehow, strangely and wondrously, she ends up being a key player in the rise of Israel’s greatest king - King David, who is the template for the promised Messiah, Jesus Christ, the very one who would make justice roll like rivers.

And how did Jesus change everything? The Bible tells us by obedience - obedience even to death on a cross, as the book of Philippians in the New Testament describes. And why does he do that? To make us citizens of another city altogether, a heavenly one in which truth and justice does reign.

Image: The statue of Confederate General Williams Carter Wickham lies on the ground after protesters pulled it down. (Richmond Times-Dispatch Via AP: Alexa Welch Edlund) https://www.abc.net.au/news/2020-06-11/why-people-are-pulling-down-statues-in-the-us-in-protest/12343766