Nobody expects the Spanish Inquisition... and what this blogger has to share about witch hunts and the enlightenment!

Nobody expects the Spanish Inquisition... and what this blogger has to share about witch hunts and the enlightenment! 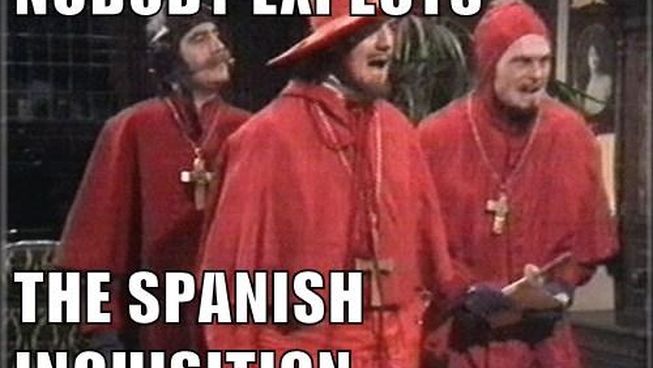 "In the early years of the 16th Century, to combat the rising tide of religious unorthodoxy, the Pope gave Cardinal Ximinez of Spain leave to move without let or hindrance throughout the land, in a reign of violence, terror and torture that makes a smashing film. This was the Spanish Inquisition."

So goes the on text screen of Monty Pythons farcical, fun and famous skit about the Spanish Inquisition. Funnily enough in a very non comedic way, this skit captures quite a few falsehoods about the witchcraft hunts in Rodney Stark’s book For the Glory of God How Monotheism led Reformations, Science, Witch-Hunts and the End of Slavery.

According to Stark's work, in which he refers to numerous historians:

1. The witchcraft hunts and trials were as much a product of the Enlightenment as they were of mediaeval Europe. They were a generally accepted reality, so much so that even those at the top of the Scientific Revolution and the Enlightenment accepted the assumptions of witchcraft and significant figures endorse the witch hunts.

Now, when I checked out some of these names a bit online, you can see that people like Joseph Glanvill was both a scientific and religious thinker. The same goes for Henry More. But the point still stands, it wasn’t fanatical clergy at the centre of the witch hunts. It was a society wide issue.

Take for instance, Thomas Hobbes (1599-1679) outspoken atheist and writer of Leviathan who dismissed all religion as ignorance and lies. He wrote that witches had no real power and yet “they are justly punished.”1 Consider also, Jean Bodin (ca 1530-1596) a political theorist, lawyer and natural philosopher. He wrote Demonomania of Witches which apparently deeply fuelled the witch fires of Europe.2 He wrote of witchcraft,

“to alert readers that there is no crime that could be more atrocious or deserve more serious punishment.”

And here is the punch home point of Rodney Stark’s, the Enlightenment writings on witchcraft based their arguments and ideas firmly on reason. Though, I will note that Stark needed to do a lot more to sustain this point. Solely referencing Bodin’s writing is not enough to prove his case.

2. Related to the above, the church or religious authorities are very often presented as the leaders in the witchcraft hunts, hence the Spanish Inquisition making an appearance in 20th Century England, according to the Python boys. However, the truth is more complicated.

Stark notes the ecclesiastic courts (that is religious courts) were far more lenient and fair in dealing with accused witches than the non religious, secular courts. And rather than being the leaders in the hunt for witches the ecclesiastical courts were established to stop the actions of mobs. This was the case for the Spanish Inquisition initially. In regards to it, 1900 people were accused. Most were not charged and only 11 were condemned. Yes, 11 condemned is terrible but this is a far cry from “a reign of violence, terror and torture that makes a smashing film”

Furthermore, many church leaders at the time didn’t believe in the powers of witches. In one funny example, a woman came to a local church pastor saying she was a witch, and presumably that she could transform herself and fly etc. So the pastor went around and locked the doors of the room and proceeded to chase her around the room with a stick (or perhaps a broom!) taunting her to escape through the locked doors and whacking her in order to prove to her that she wasn’t a witch.

3. Finally the kind of numbers implied in the Monty Python skit are a far cry from the truth. This isn’t the fault of the cast of Monty Python. They are just absorbing the rubbish work of past historians who made assertions but never did the hard work of looking over actual court and church records from the period.

The witchcraft era is dated between 1450-1750 with the worst episodes between 1550-1650. During those 300 years, the scholars who have sifted the numbers give the best estimate of 60,000 deaths in total related to witchcraft executions.3 Though it may have been as high as 100,000 deaths.

However, it isn’t surprising that we think there was wholesale terror in Europe, given the assertions, rather than careful research of some writers on this topic. Here are a couple4 of examples:

And when we look at the specific episodes of the witch hunts, for usually it was in a specific region for a short time, we see the same kind of results. The true historical events have been grossly misrepresented. Here are just a few examples:

However, Stark notes that capital punishment was the usual punishment at that time for all significant offences. Thus, many more thieves and robbers were executed in the same period as the witches. Furthermore as noted above, many trials resulted in very mild punishments or even reconciliation with the church.

In light of all this, we could perhaps re-write the Monty Python Skit. But without all the misrepresentations it just wouldn’t be funny: no wholesale terror, and no funny clothes on the cardinal and his mates for they could just as likely have been members of a secular court and part of the enlightenment establishment.

For further reading:
Rodney Stark references this work regularly in his chapter on this topic:
Trevor-Roper, HR. [1969] 2001, The Crisis of the Seventeenth Century: Religion, the Reformation, and Social Change, Indianapolis: Liberty Fund.

2 Rodney Stark's brief description of Jean Bodin as a bitter enemy of the church and secret atheist doesn't seem to correlate with material I've read on the web. Stark may have overstated his case here.