How does it compare to the original?

How does it compare to the original? 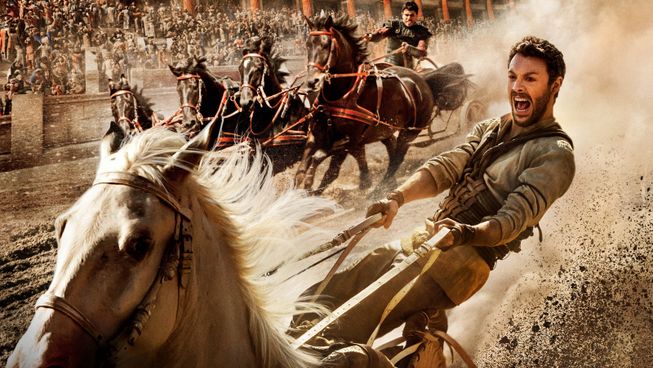 It has been 57 years since the The film with the big chariot race. It is what most people think of when they hear the name Ben-Hur. Even though the chariot scene is legendary, Lew Wallace's epic tale of the prince of Jerusalem, Judah Ben-Hur (Jack Huston), contains enough content to fill multiple films. Director Timur Bekmambetov's (Abraham Lincoln: Vampire Slayer) adaptation includes a story of sibling rivalry gone bad with Judah falling victim to false accusations of treason by his adopted brother and Roman officer, Marsella (Toby Kebbel). Judah is relegated to slavery on a Roman ship for five years and then is jettisoned into a new freedom that brings him in front of his accuser and is given a unique opportunity to clear his name and save his family.

Wallace's story has stood the test of time because of the rich story telling and the great combination of drama, action and the spiritual realm. This outing is a Ben-Hur for a new generation which is shown in the use of special effects and the modern look. Even with the new look, the heart of the story remains. Bekmambetov tries to provide a brevity answer to the classic 1959 version with Charlton Heston. This helps with the audience attention span, but it does sacrifice some of the richness of the original storyline. He caters on the chariot scene, which will draw in the action aficionados, but take the focus away from some of the richness in the surrounding narrative.

The pre-production challenges caused changes in the cast and the director's chair which may account for some of the holes in the finished film. The inevitable timeline jumps made for lapses in believability, but anyone new to the story will be able to access the film without much difficulty. At the heart of the writing, Huston and Kebbel provide an admirable job in delivering the needed sibling rivalry. Morgan Freeman is well, Morgan Freeman in dreadlocks. He is a strong on screen presence and an effective mentor for Judah, but he is relegated to monologues for the majority of screen time. Bar one key character, the rest of the cast was regulated to window dressing for to Huston's Judah Ben-Hur.

The one character that makes key cameo appearances is Jesus (Rodrigo Santoro). Even though was in the novel's original title, throughout the classic's run in cinemas, the Christian Messiah is relegated to the sidelines. He is given lines in this adaptation, which honour the original writings of the Bible, but will be challenged by the resident historians in the audience. Most of his scenes felt a bit tacked on, but do assist in moving the story line along. His inclusion is important for the narrative, but did not have the natural feel that could have complemented the film in the end.

For the fans of the Christian film genre, they will be pleased with the quality of this production and Jesus does get a mention. For those looking for an action-packed drama, they will enjoy the portions that occur throughout much of the poorly written dramatic portions. The chariot race does deliver the needed conclusion. Ben-Hur is an admirable outing for the Jewish prince, but does not measure up to it's celebrated predecessor.

REEL DIALOGUE: What do you believe?

Ben-Hur challenges the notion of what it is we believe in. Throughout the film there are references to different faiths and beliefs, but it does give a very pointed answer to this question. So, back to the original question, what do you put your faith in?