Driving cradle to grave (just in a better car)

We will all make our last journey in a car

Driving cradle to grave (just in a better car)

We will all make our last journey in a car 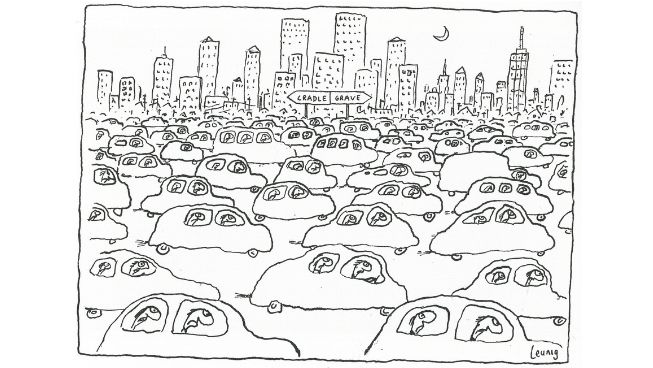 We will all make our last journey in a car. And that journey is probably going to be a little slower than the myriad journeys we’ve made in the past. Somewhat more sedate.

On that last trip we won’t be juggling coffee cups and breakfast sandwiches; we won’t be shaking fists at the unthinking swine who cut in on us; we won’t be casting sideways glances at the cute girl or guy in the VW in the lane next to us as we grind through the traffic jam caused by the roadworks that are expected to be finished sometime in the week before Jesus returns. And we definitely won’t be looking for the rat run through a side street so we can get to our destination on time.

Our last trip will be in a car that is clean to within an inch of its life. Cleaner than yours, perhaps even cleaner than the car this OCD writer drives. That car won’t have used coffee cups, Maccas boxes, rogue sushi rice grains, and lost coins lodged in and around the seats, an area of deep space where even the Imperial forces could not reach. It will be an expensive car, maybe more expensive than the one you last owned. The kids won’t have bounced over the back seats or dripped ice cream down the headrest.

That last trip won’t be filled with your thoughts about excuses for being late or whatever. In fact being late, fashionably late, is probably going to be forgiven this one last time.

I love Australian artist, Michael Leunig’s rightly cherished cartoon cradle to grave with its drivers straining forward in anger, seeing if they can get to their destination before everyone else, the tall sarcophagus skyscrapers in the background adding to the slightly menacing tone.

We laugh and we laugh knowingly. We know it’s us, we know it should not be us, but we know that it will be us, again, tomorrow morning. We might print out that cartoon and put it on our desk or screenshot it to remind us how not to live. But chances are we will do it all again tomorrow. Rinse, repeat.

Why does it feel like that? Why does it feel like we’re going pedal to the metal for the few frantic decades we have as adults? I hit fifty a few years back and then fifty hit me. It had a strong punch, strong enough to first make my eyes water, then clear them clearer than they’d been in a while. Mortality - the idea of it - sets in long before mortality itself claims us (at least that’s the hopeful theory).

Part of it - much of it - is to do with the deep realisation that time is running out. It never stops, and if we do stop, then it’s an admission that time may indeed beat us. And we have built our lives around the need to keep this pace up because we will fall behind our dreams of ourselves, or we will fall behind the others, whoever they are, who are rivals in the race to achieve that dream.

Yes, yes, we know all this, and in a sense our knowing of it ensures we keep busy in order to suppress that knowing. But time will catch up with us all. It’s cradle to grave all the way whether we drive a Beemer 5 Series or a Toyota Camry. We’ll get our license at seventeen, probably have to hand it in by eighty or so, and in that period we will have racked up hundreds of thousands of kilometres, around two and half billion heart beats, a number of relationships, perhaps a marriage (or two or three), some kids, plenty of laughs, plenty of heartache, and an irresistible urge to keep going.

The drive from cradle to grave ends at some stage. Does it have to be the grave?

Next week: When The Drive is Shorter Than We’d Thought It Would Be.