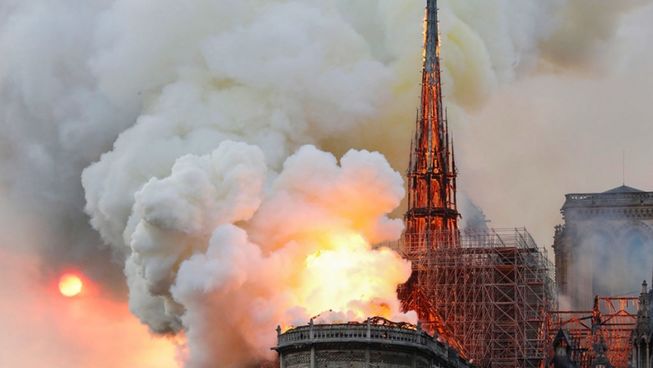 As Paris mourns and considers what to do during the aftermath of Notre Dame Cathedral being engulfed by a catastrophic fire, one message consistently stated is that ‘we will rebuild.’

French President Emmanuel Macron was quoted, “Let’s be proud, because we built this cathedral more than 800 years ago, we’ve built it and throughout the centuries, let it grow and improved it. So I solemnly say tonight: we will rebuild it together.” (Reuters/AP 16 April 2019)

This tragedy and the response bring to mind the words of the famed director Ingmar Bergman, who wrote these infamous words. This contemplative quote allows us to consider the purpose and plans of those who come in to pick up the pieces and hope to rebuild the famed Notre Dame back to its former glory.

‘People ask what are my intentions with my films — my aims. It is a difficult and dangerous question, and I usually give an evasive answer: I try to tell the truth about the human condition, the truth as I see it. This answer seems to satisfy everyone, but it is not quite correct. I prefer to describe what I would like my aim to be. There is an old story of how the cathedral of Chartres was struck by lightning and burned to the ground. Then thousands of people came from all points of the compass, like a giant procession of ants, and together they began to rebuild the cathedral on its old site. They worked until the building was completed — master builders, artists, labourers, clowns, noblemen, priests, burghers. But they all remained anonymous, and no one knows to this day who built the cathedral of Chartres.

Regardless of my own beliefs and my own doubts, which are unimportant in this connection, it is my opinion that art lost its basic creative drive the moment it was separated from worship. It severed an umbilical cord and now lives its own sterile life, generating and degenerating itself. In former days the artist remained unknown and his work was to the glory of God. He lived and died without being more or less important than other artisans; ‘eternal values,’ ‘immortality’ and ‘masterpiece’ were terms not applicable in his case. The ability to create was a gift. In such a world flourished invulnerable assurance and natural humility. Today the individual has become the highest form and the greatest bane of artistic creation.

The smallest wound or pain of the ego is examined under a microscope as if it were of eternal importance. The artist considers his isolation, his subjectivity, his individualism almost holy. Thus we finally gather in one large pen, where we stand and bleat about our loneliness without listening to each other and without realizing that we are smothering each other to death. The individualists stare into each others’ eyes and yet deny the existence of each other.

We walk in circles, so limited by our own anxieties that we can no longer distinguish between true and false, between the gangster’s whim and the purest ideal. Thus if I am asked what I would like the general purpose of my films to be, I would reply that I want to be one of the artists in the cathedral on the great plain. I want to make a dragon’s head, an angel, a devil — or perhaps a saint — out of stone. It does not matter which; it is the sense of satisfaction that counts.

Regardless of whether I believe or not, whether I am a Christian or not, I would play my part in the collective building of the cathedral.’